In his collection Warriors Between Worlds artist Mike Holden (Salteaux/Cree) explores the conflicting nature of the modern history of the indigenous peoples of Turtle Island and their relationships between patriotism, tradition, genocide, and a strong record of military service for governments that largely fail them.

From the War of 1812 to Afghanistan and Iraq, and every war and conflict in between, indigenous warriors have been disproportionately represented in the armed forces, making up the highest percentage per capita of any race. This in spite of the bloody history of genocide indigenous peoples have had with the Canadian and American militaries.

In Geronimo, Holden depicts not only warriors from the longest of the Indian Wars, The Apache Wars, but also the ways in which the Apache are now honoured by the American military, having a helicopter named for their nation and “Geronimo” being a battle cry for paratroopers since WWII.

Dreaver celebrates war hero Chief Joseph Dreaver who also served as the chief of Mistawasis Cree Band and was a lifetime member of the Federation of Saskatchewan Indians. His service taking place during WWI and WWII it was a time when indigenous peoples did not have the right to vote in the countries they lived in, and most were not legally allowed to travel from their reserves and reservations without a permit. The great irony being that all warriors who served in either world war were fighting for the “freedom” of others, while their children were being forcibly taken to residential/boarding schools and their own language and ceremonies were outlawed. Though military service at this time granted indigenous peoples the same rights as other citizens, it also meant they lost their cultural status.

The relationship between indigenous peoples and the countries they have both served for and fought against, is complex even today. Sherman Alexie has called reserves/reservations the oldest POW camps in the world, standoffs such as Oka and Wounded Knee still evoke strong emotions on either side, the Canadian government under C-51 has defined most socially conscious and politically active indigenous people as terrorists (peaceful or not), and meaningful consultation guaranteed under treaties and laws are largely ignored from Oak Flat, AZ to the Site C Dam Project in northern British Columbia. And yet, a perplexing level of patriotism and draw toward military service still exists among many people leaving them torn between two worlds. This can be seen in Holden’s signature intermingling of Canadian and American flags with traditional indigenous imagery. As Holden works through this collection he reflects on the dynamics of what patriotism means and has meant to various nations from the beginning of colonization, and where cultural identity and loyalty as warrior to one’s indigenous nation factors in, while he seeks to understand his own place as an indigenous Canadian. 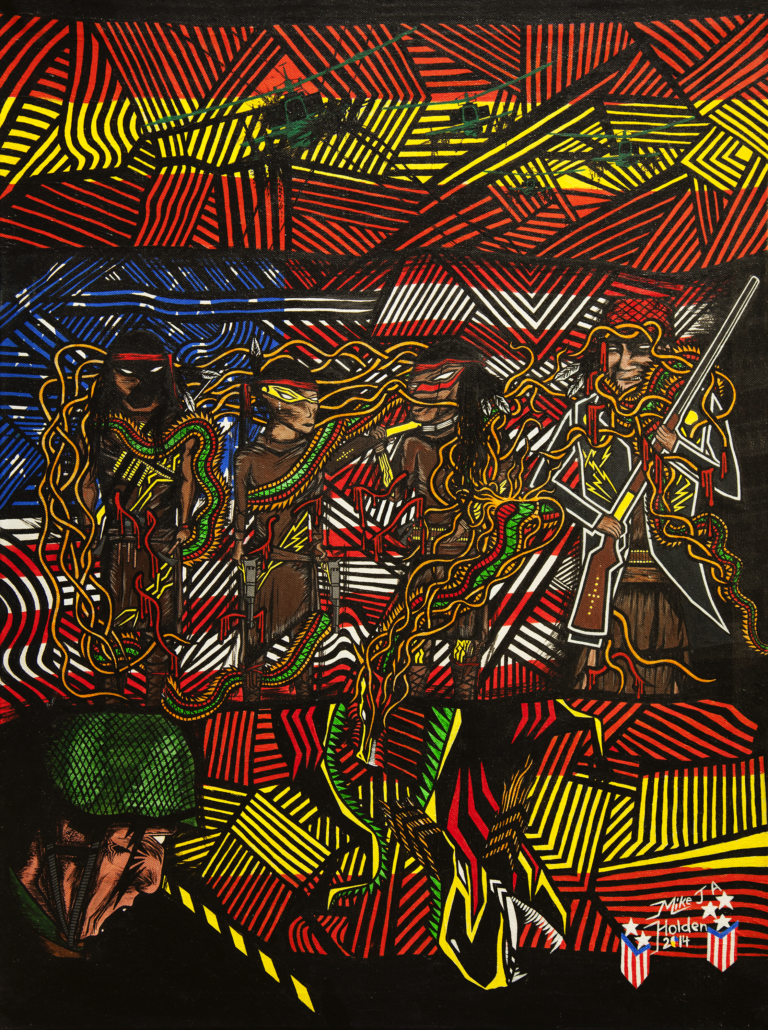 Apache warriors are honored for the courage of their nations which fought with unparalleled bravery against the United States between 1849 and 1886, when Geronimo surrendered, and to a lesser extent for another 38 years after. The tendrils of lightning encasing the warriors are a depiction of how the first peoples saw the lethal power of gunfire that struck men dead with a thunderous flash. The serpent with the many tentacles strangling Geronimo and piercing through the skin of the Apache warriors depicts the mass genocide inflicted by the US.

The Apache helicopter, the most lethal helicopter in the world, was named after the Apache Warriors for their ferocity in battle. Some of the weapons used by the Apache warriors have been adopted by the US military such as the Tomahawk and several combat knives. And as early as 1940, American paratroopers of all ancestries adopted “Geronimo” as a battle cry for jumping into combat.

Today the Apache warrior tradition continues as a proud and disproportionate number of patriotic Apache men and women who serve in the American military. For this reason the red, white, and blue of the American flag appears in the background—a flag countless Apache veterans have heroically fought under for nearly a century. 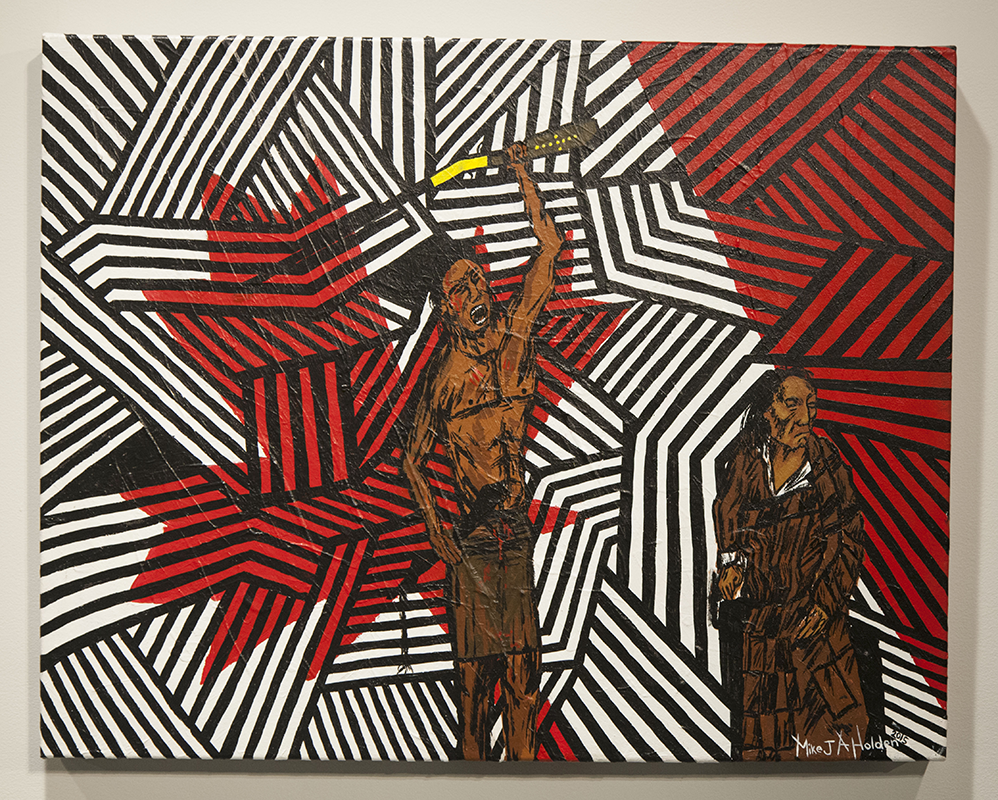 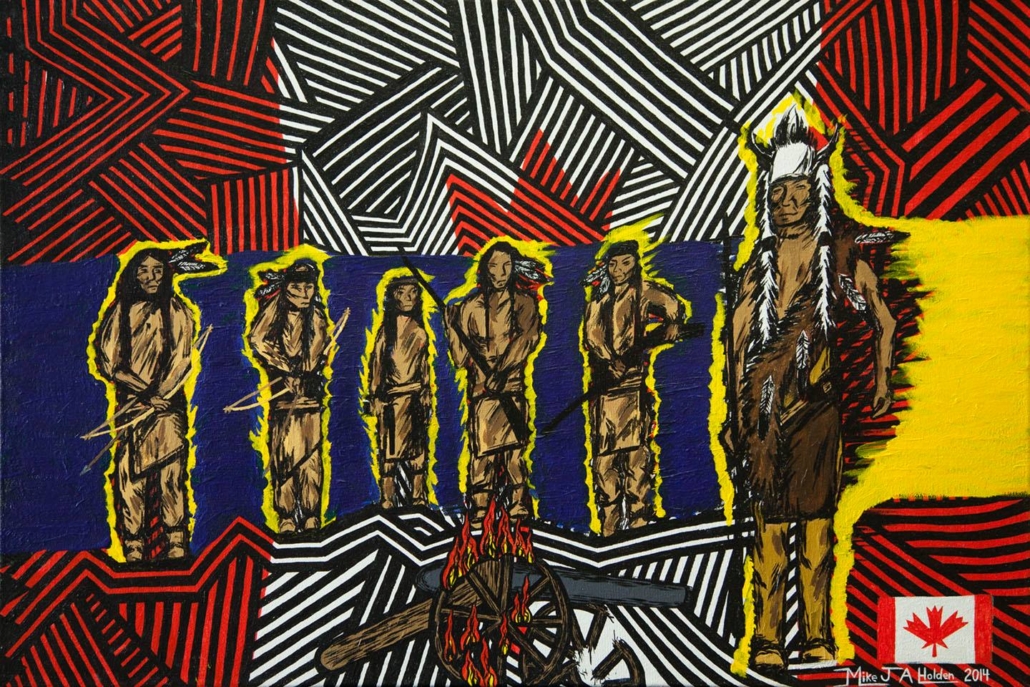 Fine-Day was one of the most fierce, well known and respected Plains Cree warriors of his time. He was involved in dozens of battles and horse raids. He was the head/lead warrior of the Rattler society, one of the many Plains Cree tribes of the powerful Iron Confederacy. He was a skilled warrior; hunter; trapper; and, in later life a powerful shaman and elder.

On May 2nd 1885 near Battleford Saskatchewan a battalion of North West Mounted Police and 350 Canadian Troops led by William Dillon Otter set foot to obliterate the massive Cree Assiniboine encampment led by Poundmaker. They had 2 cannons and a Gatling gun. A scout early in the morning spotted the approaching soldiers and quickly sent word to the camp. Fine-Day immediately organized a counter attack. The Cree fought in small groups. One group would run forward, attack the soldiers then rush back to the ravine before the soldiers could get them. As soon as the soldiers tried to attack the warriors on one side, another group of warriors would rush out of the second ravine and attack them from behind. All other warriors guarded the women and children. Otter could not attack, because he had no idea where the enemies were nor of their numbers. After six hours of fighting, Otter decided to withdraw and retreat. Many of Fine-Day’s men wanted to chase the retreaters down and kill them but Poundmaker asked the warriors to let them leave and live. The warriors respected Poundmaker and Otter so the men safely escaped. Had Chief Poundmaker had not asked his warriors to let the troops escape the battle may have turned into a massacre, just like the Battle of Little Big Horn. Some People compare this battle, the Battle of Cut Knife, to the Battle of Little Big Horn.

It is estimated that Fine-Day had only 50-100 warriors and Canada had nearly 400 troops two cannons and a Gatling gun. The Cree still won. Thus the destroyed cannon burning on fire at the bottom of the painting is present. 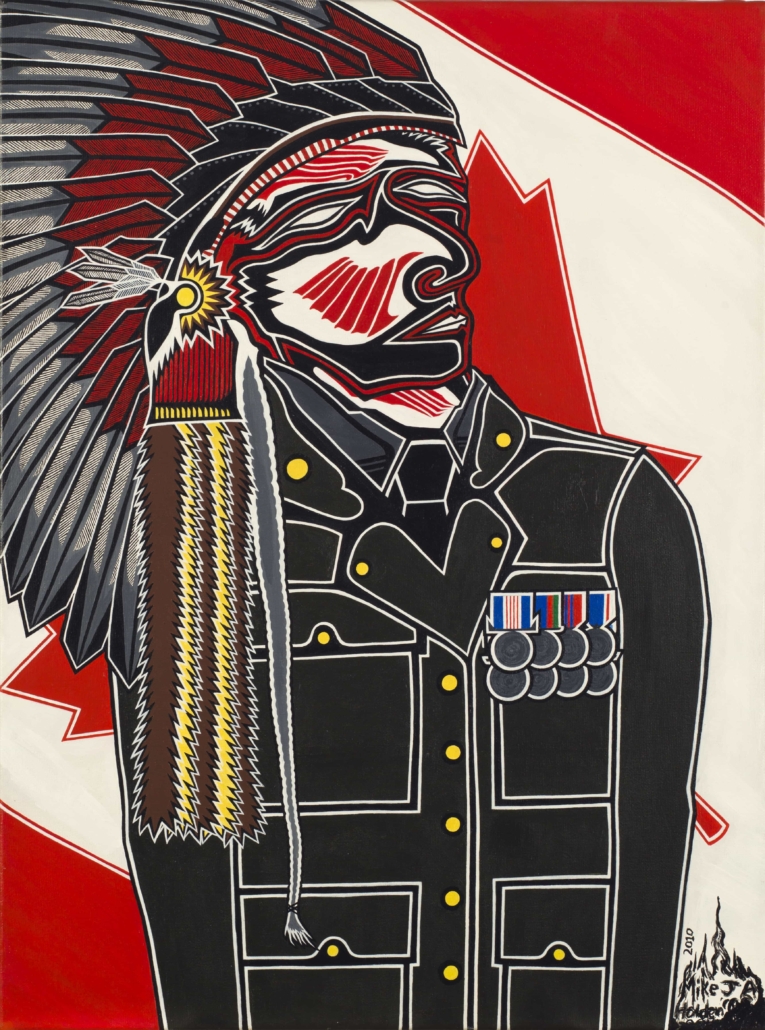 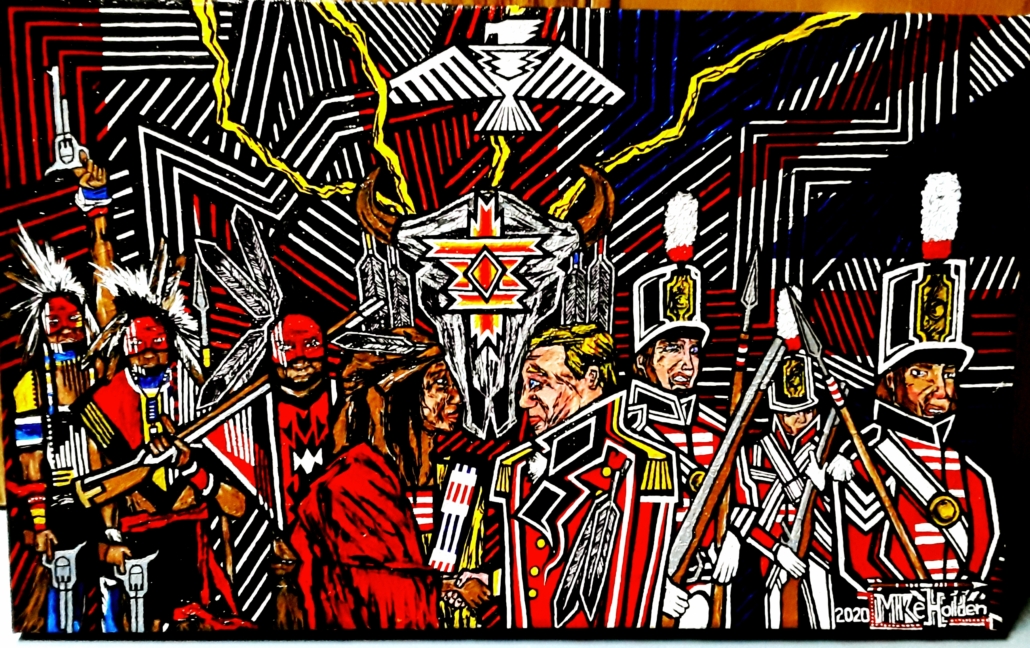 The War of 1812, at the time considered a backwater sideshow compared to the Napoleonic Wars raging in Europe, was the conflagration that ultimately gave rise to Canadian national consciousness. The British army, navy, and militia manned a few outposts at the start of the war, hardly a deterrent to the large forces amassed by their American adversaries. Vital to Canada’s resistance and eventual invasion of the United States were the Native allies of the British, comprised of the Great Lakes and Ohio Country Indians. In one of the great ironies of Canadian History, the two men responsible for Canada’s successful defense were neither born in, nor particularly cared for the land we now call Canada. Tecumseh, the Shawnee chief who galvanized one of the largest Indigenous confederacies east of the Mississippi, and spent the majority of his life fighting American expansion into Indian Country, was perhaps one of the most vital players in the war. General Isaac Brock, was a British general sent to oversee Canada’s defense, while longing to be commanding in Europe in the midst of the fight against Napoleon. Both men died in battle, shot by Americans, Brock at Queenston Heights (Niagara) in October of 1812 thwarting an American invasion, and Tecumseh at the Battle of the Thames in Southwestern Ontario in October of 1813 leading a spirited resistance against American invaders. While Brock has a towering stone monument and Tecumseh a secret hidden grave, both men were foundation in creating the nation that is today Canada.